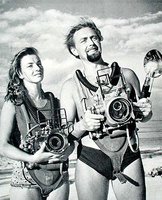 René Hugenschmidt is introduced to the diving sport in the Italian city of Nervi and realizes that from that moment on his life will be dedicated to underwater photography. The young constructional engineer transforms his workshop at the Zürichzee into a Hugyfot assembly plant.
At first the production is limited to housings for Agfa, Edixa, Exakta, Kodak, Leitz, Voigtländer and Zeiss cameras.

At the same time, the Cousteau-Gagnan regulator makes it’s entry and in Paris the world’s first diving related magazine is released. Hans Hass gets well-known with his movies ‘Abenteuer im Roten Meer’ and ‘Unternehmen Xarifa’ and arouses a general interest in the world below sea level. The diving industry is starting to get organized.

The first generation of Hugyfot housings is making way for the new, more comfortable models that are equipped with side-mounted controls for shutter speed and aperture control. The French journalist Jean Lattes writes: “Hugyfot, it’s the king of underwater housings!” As a reaction the newest housing is named 'Hugyfot Royal' and the Hugyfot logo is given a crown.

The first housings for motion-picture cameras are being developed, mostly for Bolex, Bauer, Beaulieu, Camex, Eumig and Nizo cameras.
The production of these housings is mostly based on individual orders and they are delivered to dive fanatic customers in more than 36 countries.
The Englishman Steve Mc Millan writes: “Your housing is made like a Rolls-Royce!”

René gets a first order from Hasselblad for the delivery of hundreds of housings for the Super-Wide-C and C-cameras. The production becomes a success, partly due to the sophisticated mechanics and the optical viewfinder with light metering mode.
Hasselblad Manager Gertvall feels sympathetic towards the Hugyfot project. He passed his hand over the housings’ rounded shapes and says: “What a great shape – just like a Ferrari!”

Thanks to industrial switches of German manufacturers as Regula-King and Paffrath Kemper, the first ever electronic underwater strobes are developed.
Furthermore, the production of the Eumig-Vienette Super 8 housing looks very promising: more than 2.500 of the Eumig-Submarin housings will be sold in the next years.

Japanese 35mm cameras conquer the world. It’s getting washed over with foreign brands like Asahi-Pentax, Canon, Fujca, Konica, Minolta, Nikon, Olympus and Topcon while the established German brands get pushed to the background.
Hugyfot evolves and develops suitable housings for these 35mm cameras.

By order of European film and television makers, René starts the development of a housing for the 16mm and 35mm Arriflex filmcameras. Later on, Sony-Betacam videocameras will be housed in Hugyfot housings as well.
The extraordinary quality and reliability of these housings cause more and more professionals to rely on Hugyfot: NDR, ZDF, F1, Hans Hass, Jacques-Yves Cousteau, Leni Riefenstahl as well as many winners of photo and film competitions.

The sensational Nikon F4 is announced and René succeeds in being the first to release a housing for this particular camera. Furthermore, this housing is equipped with the patented Hugyfot grip which does not only hold a very sensitive shutter release control but which also allows one-hand underwater photography.

René starts the construction of a new and modern assembly plant that is entirely focused on the production of Hugyfot housings.

By the end of the year, a new production is initiated in Stockach at the Bodensee. Housings and accessories are assembles in series by a team of qualified and motivated employees and most of the products are available from stock. Housings are cast and finished on CNC-machines. The new models Hugyflex AF and Arius are smaller than the F4 housing but share the same successful design. They are mainly designed for the Nikon F70, F601, F801 and F90(x).

The mini housings ATLA and ATLANTIS F50 are released. For the first time ever, a ‘ready to use’ housing including port and zoom gear are offered at an interesting price.

The housing for the Nikon F5, shaped by the already typical Hugyfot curves, makes its entry and enjoys a lot of attention from professionals at the Photokina exhibition in Cologne. At that moment, no other manufacturer has succeeded in releasing a housing for this camera.

By the end of the year, the housings for the Nikon F80 - the ATLAN 80 and ATLAN 81 - are in production. The camera itself seems to become a true best-seller. Besides features that used to be available only on more expensive models, it is also equipped with individual programming features which make him extremely ‘housing-friendly’. As these housings are produced in large quantities they can be sold at a very attractive price.

The Green Force management, manufacturer of underwater lighting systems, takes over the company and moves it to Erembodegem in Belgium. The broad experience this company has built in the field of metal working and constructional engineering is implemented in the housings’ production process. Computer controlled 5-axis CNC-machines allow a - till then - unseen precision.

Hugyfot Belgium is contacted by Leica for the development of the Leica Digilux-2 housing. It appears to be dead on target and the pretty design of this housing enjoys a lot of admiration and attention.
More and more digital cameras appear at the ‘underwater’ scene and Hugyfot decides to only focus on the development and production of housings for digital SLR-cameras.

Hugyfot releases housings for the Nikon D70 and the Canon 350D. Both cameras are extremely popular amongst amateur underwater photographers because of their excellent relation of price to quality. These housings become the Hugyfot bestsellers in no time.

With the arrival of the Canon 5D and the Nikon D200, the expectations of the more demanding underwater photographers are granted as well. Especially the Nikon D200 seems to be the camera that urges a lot of them to finally move over to digital photography. Both Hugyfot housings find a good market in this segment.

Hugyfot is the first to succeed in developing a housing for the Nikon D300 and presents it to the public during the Antibes Film Festival.

The ever faster evolving market of digital photography demands more and more efforts from the housing manufacturers to keep the pace. Hugyfot keeps on investing in new technology and equipment and is ready to take up the challenge.

Hugyfot BV is founded by 2 former employees of the Hugyfot production plant. All sales, marketing and product development activities are transferred to Hugyfot BV. The production unit remains at Erembodegem (Belgium).